There are two undeniable facts. The first is that the rallies in Australia which preceded the bombing of Baghdad were enormous. Precise estimates of attendances in Sydney and Melbourne — ranging from 100,000 to double that figure — are impossible to verify but, in any case, situate those mobilisations as among the largest in recent Australian history. The second is that any assessable anti-war sentiment declined rapidly, particularly once Australian along with US and British troops entered Iraq. 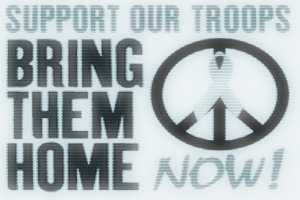 Not only was there a rapid decrease in anti-war mobilisations but there occurred an abrupt rise in polled support for the war after its declared beginning: up from 6% at the end of January to 25% just prior to the bombing of Baghdad, and subsequently rising to 45% in one week. These two paradoxical facts, whose incongruity is not entirely erased or explained by succession, are either curious bits of data that cancel eachother out or insufficiently empirical, conveying an entire philosophy about, for instance, the association between rallies, movements and radicalisation that no longer exists, if indeed it ever did.

The contrast makes no sense if one presupposes an unbreachable separation between anti-war and pro-war positions, at least as they presented themselves in Australia. Here, the privileged terrain upon which those positions were arrayed was not war so much as the perceived interests of the nation-state—opposition to and support for the war simply gave expression to competing interpretations of such. In one sense, this was nothing exceptional: the geopolitical disposition of war—which is to say: sovereignty as the exalted model of action and interest—is often reinscribed in the rhetorics of anti-war campaigns. This has usually taken the form of a defense of the sovereignty of what used to be called ‘Third World’ nation-states.

Therefore, and in its dominant versions, opposition to the war was expressed as support for Iraqi civilians, as being ‘in the national interest’ and organised as a variant of populist, national unity. For instance, the Victorian Peace Network’s chief objections to the war were that it “would result in ‘widespread slaughter’ of countless Iraqi civilians” and that it would increase “the likelihood of terrorist attacks on Australian civilians.” [1] Such sentiments echo long-standing historical anxieties about Australia’s geographic ‘isolation’ from white, Christian Europe and North America. Perceived to be constantly under threat from the forces of gravity depicted by an atlas, this specifically Australian xenophobia animated every declaration of national interest as the justification for opposing military involvement.

Therefore, it was not at all difficult for what was ostensibly an anti-war campaign to accomplish a series of retreats. Rallies coordinated under slogans such as ‘Bring Our Troops Home’ quickly and easily modulated into supporting ‘Our Troops’ in their tasks once they had firmly entered Iraq. Whereas it might have seemed pertinent and consistent to talk about the re-deployment of the same military units from policing the border against undocumented migrants from the Middle East to war in the Middle East, Church groups who once defended the rights of people to move now opted to use the spectre of Australia being flooded by refugees as a reason to oppose the war. Opposition to the so-called anti-terrorist laws was blithely transplanted by talk of Australia becoming a target for terrorists. At the official close of the war, prominent sections of the anti-war coalition (such as the Greens and the ALP) preoccupied themselves with the allocation of commercial contracts for the ‘Reconstruction’—the involvement of Australian troops was, perhaps had always been, regarded as simply an unsound investment in national capitalist expansion. Even the usual expressions of pacifism as grounds for opposing the war were supplanted by Australian nationalism as the favoured means for assembling constituencies throughout the mobilisations.

To put it another way: what was composed in the course of the campaign was not a ‘movement’, certainly not one that bore any positive connection to the forms and content of recent anti-capitalist/anti-summit protests, but the materialization of a looming electoral contest over who best represented ‘the national interest’—the application of techniques of capture rather than a chance for movement. Demonstrations were little more than exercises in marshalled passivity, coordinated by state-based coalitions of political parties, unions and religious groups whose conspicuous aims fluctuated between sending “send a clear message to our politicians” [2] and delivering up constituencies for the various non-Government parties (ALP, Greens, Socialist Alliance, Democrats).

Where sections of the anti-war protests were not reducible to either of these aims—that of reviving some legendary Civil Society that would appeal to State power or a straightforward electoralism geared toward procuring State power—the popular frontist form of organisation adopted by the anti-war coalitions ensured that they were rendered invisible or isolated and left open to criminalisation. The combined effects of organisational centralisation and the goal of building a ‘broad’ anti-war coalition resulted in the ascendancy of the campaigns’ least radical aspects: a welcoming of conservatives as part of ‘the movement’ coupled with calls for the exclusion of radicals, denounced in one instance as “traitors to the movement.” [3]

When conflicts within the campaign did appear, they were predictably represented—and thereby depoliticised—as a conflict between ‘violent’ and ‘non-violent’ protest, whereby the use of force by union marshalls, security guards and police disappeared from view. When police taunted a group of students from Arabic backgrounds, and in one instance attempted to remove a woman’s hijab, some of the students fought back, throwing chairs and bottles at police. The event was widely regarded amongst the Sydney coalition as the work of ‘young, hothead Arab males’ who had to be pulled into line and extremists who had to be excluded from the coalition, with the Books Not Bombs Coalition (i.e., Socialist Alliance) going so far as to call for the attendance of parents and clerics at a later student rally so as to provide a calming influence. At this later demonstration, declared illegal by the NSW Government, students were hemmed in by police horses, sprayed with capsicum gas, and heavily policed by marshalls from BNB (who became the target of missiles thrown by demonstrators). However, what is notable not that some students fought back against police but that they, momentarily at least, escaped the managed limits of the demonstrations at all.

Angela Mitropoulos
[A longer version of this appeared in Wildcat (in German) and Derive Approdi (in Italian) in 2003.]